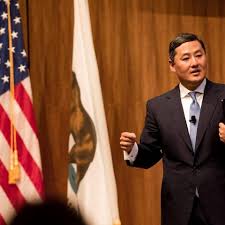 Presidential Leadership & Federalism During The Pandemic - SOLD OUT

While much of the power in fighting the pandemic lies with the states:

“Our greatest presidents, such as George Washington, Abraham Lincoln, and Franklin D. Roosevelt, pressed their constitutional power to the limits to confront crisis, emergencies, and war when others could not or would not act … The real saviors of the nation now will be different executives, those of the states.”


FREE
HCSF Zoom Webinar (dial-in information will be sent on Thursday, April 23 at noon to those who RSVP)
Please make sure you are all set to use Zoom before you join the conference (log-in the day before to try it out). The event will start on time. Click here to "GET STARTED" on ZOOM.

Professor Yoo is the Emanuel Heller Professor of Law and director of the Korea Law Center, the California Constitution Center, and the Law School’s Program in Public Law and Policy. His most recent books are Striking Power: How Cyber, Robots, and Space Weapons Change the Rules for War (Encounter 2017) (with Jeremy Rabkin) and Point of Attack: Preventive War, International Law, and Global Welfare (Oxford University Press, 2014). Professor Yoo is a visiting scholar at the American Enterprise Institute and a visiting fellow at the Hoover Institution.

Professor Yoo has clerked for Justice Clarence Thomas of the U.S. Supreme Court and Judge Laurence H. Silberman of the U.S. Court of Appeals of the D.C. Circuit. He served as general counsel of the U.S. Senate Judiciary Committee from 1995-96. From 2001 to 2003, he served as a deputy assistant attorney general in the Office of Legal Counsel at the U.S. Department of Justice, where he worked on issues involving foreign affairs, national security and the separation of powers.

He held the Fulbright Distinguished Chair in Law at the University of Trento in Italy, and he has also been a visiting professor at Keio Law School in Japan, Seoul National University in Korea, Chapman Law School, the University of Chicago, and the Free University of Amsterdam. Professor Yoo also has received the Paul M. Bator Award for excellence in legal scholarship and teaching from the Federalist Society for Law and Public Policy.

Professor Yoo has written several books: The Powers of War and Peace: The Constitution and Foreign Affairs after 9/11 (University of Chicago Press, 2005); War by Other Means: An Insider’s Account of the War on Terror (Grove/Atlantic, 2006); Crisis and Command: The History of Executive Power From George Washington to George W. Bush (Kaplan, 2010); and Taming Globalization: International Law, the U.S. Constitution, and the New World Order (Oxford, 2012). He has also co-edited Confronting Terror: 9/11 and the Future of American National Security (Encounter, 2011) (with Dean Reuter); Current Issues in Korean Law (Robbins Collection, 2014) (with Laurent Mayali); and Liberty’s Nemesis: The Unchecked Expansion of the State (Encounter, 2016) (with Dean Reuter).