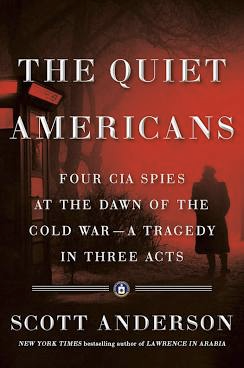 At the end of World War II, the United States was considered the victor over tyranny and a champion of freedom. But it was clear to some that the Soviet Union was already seeking to expand and foment revolution around the world, and the American government's strategy in response relied on the secret efforts of a newly formed CIA. Chronicling the fascinating lives of the agents who sought to uphold American ideals abroad, Scott Anderson follows the exploits of four spies: Michael Burke, who organized parachute commandos from an Italian villa; Frank Wisner, an ingenious spymaster who directed actions around the world; Peter Sichel, a German Jew who outwitted the ruthless KGB in Berlin; and Edward Lansdale, a mastermind of psychological warfare in the Far East. But despite their lofty ambitions, time and again their efforts went awry, thwarted by a combination of ham-fisted politicking and ideological rigidity at the highest levels of the government. Told with narrative brio, deep research, and a skeptical eye, The Quiet Americans is the gripping story of how the United States, at the very pinnacle of its power, managed to permanently damage its moral standing in the world.

"ENTHRALLING...Lying and stealing and invading, it should be said, make for captivating reading, especially in the hands of a storyteller as skilled as Anderson...the climate of fear and intolerance that it describes in Washington also feels uncomfortably timely. "—Kevin Peraino, The New York Times Book Review

Please sign in with your HarvardKey otherwise a duplicate record will be created and you will not be able to log-in.
No HarvardKey? Please retrieve your HarvardKey here. If you need help, email ithelp@harvard.edu or call 617-495-7777